CBD, or cannabidiol, is a compound that naturally occurs in cannabis plants, including hemp and marijuana. (Learn More – What is CBD?)

Unlike the compound THC, which is also found in marijuana, CBD does not create the euphoric “high” feeling. CBD has fewer and different side effects than THC and does not have any addictive properties.  (Learn More – How Is CBD Different From Marijuana?)

While research on how CBD works in the body is limited and ongoing, scientists believe that CBD affects the body’s endocannabinoid system — a wide-ranging network that helps the body maintain a state of homeostasis, or balance. (Learn More – The Science Behind CBD)

Users of CBD claim the compound helps with many varying conditions, including anxiety, pain, insomnia, skin conditions, and depression. Research has also indicated that CBD has the potential to treat epilepsy and arthritis. (Learn More – What Is CBD Commonly Used to Treat?)

Many users of CBD claim they experience little to no side effects, but researchers warn that CBD may cause nausea, fatigue, and changes in appetite. Loose regulations of CBD products may increase the risk of taking higher doses of CBD or THC. Those who are taking other medications or are pregnant should talk to their doctor before consuming CBD products. (Learn More – Risks of CBD)

CBD products include edibles (like candies and sodas), oils and tinctures, vapors, pills and capsules, topicals (like lotions and creams), and smokable buds and flowers. (Learn More – How Is CBD Taken?)

These products are widely available in many parts of the country, including drugstores, malls, and even online. Those looking for quality CBD should consider a reputable specialty CBD shop or marijuana dispensary that regularly tests its products. (Learn More – Where Can CBD Be Purchased?)

CBD — which stands for cannabidiol — is a chemical compound that naturally occurs in the cannabis plant. It is the second most prevalent compound in marijuana, but CBD  can also be derived directly from the hemp plant, a relative of the marijuana plant. In fact, most CBD oil is derived from commercial hemp rather than marijuana plants.

Research on CBD is relatively new and ongoing. Many believe the compound shows potential in treating conditions associated with anxiety, pain, epilepsy, and the immune system.

How Is CBD Different From Marijuana?

Cannabis plants are made up of many types of unique compounds, including terpenoids, flavonoids, omega fatty acids, and cannabinoids.

CBD is one of the 108 discovered cannabinoids — a compound unique to plants in the cannabis family.

The most widely known cannabinoid in marijuana plants is delta-9-tetrahydrocannabinol, or THC — the cannabinoid that creates the high associated with weed and marijuana products. Its psychoactive effects can alter a user’s perception, motor function, mood, and cognitive abilities.

CBD is a cannabinoid that does not create the euphoric or high effect that THC does. However, despite common belief, CBD is technically psychoactive — in a general sense. Due to CBD’s impact on mood and cognition, scientists argue that the extract is, in fact, psychoactive. Some users feel it helps their anxiety, boosts their mood, and makes them more alert. Still, the minimal amounts of THC in hemp-derived CBD prevent it from getting users high and being commonly recognized as a psychoactive drug.

While the National Institute on Drug Abuse (NIDA) suggests that THC-centric marijuana is addictive, with up to 30 percent of users developing a problematic habit, a 2017 report by the World Health Organization claims that pure CBD exhibits no risk for abuse or addiction.

CBD is also believed to have far fewer side effects than THC, particularly when taken in the form of pure CBD oil.

Marijuana plants contain both THC and CBD. Because marijuana plants have long been bred to produce as much THC as possible (which makes it stronger and thus, more appealing on the black market and to recreational users), the vast majority of today’s weed strains contain much higher levels of THC than CBD. Most recreational marijuana strains contain 20 percent or more THC and about 10 percent CBD.

On the other hand, hemp plants may contain low levels of THC ( to be sold legally, they have to be under 0.3 percent), with levels of CBD typically higher than 20 percent.

The Science Behind CBD

Research on how CBD works in different individuals is still ongoing. CBD has long been associated with marijuana, which is still considered an illicit, Schedule I drug by the Drug Enforcement Administration (DEA). This classification has made it difficult for scientists and researchers to study the compound thoroughly. Many of the available studies on CBD have been very small or conducted only on animals and in labs. 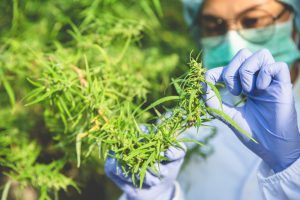 It is known that cannabis compounds, including THC and CBD, affect the endocannabinoid system (ECS).

Many are surprised to discover there’s an entire system within the body named after cannabinoids. However, the ECS was found by scientists in the 1990s, following the discovery of endocannabinoids — cannabis-like molecules created naturally in the human body.

The ECS’s main function appears to help maintain homeostasis within the body. Homeostasis relates to the body operating in biological “harmony” as it reacts to environmental factors and more. For example, if someone begins to overheat, their ECS will activate to help them cool down and balance their body temperature.

The endocannabinoid system appears to be very complex and versatile, with receptors in the brain, nerves, skin, fat tissue, liver, immune cells, gastrointestinal tract, and blood vessels. Because it is so widespread, many researchers believe the ECS is involved in many functions throughout the body, including digestion, sleep, memory, and pain.

Until recently, it was widely believed that CBD attached to either CB1 or CB2 receptors to create its effects. Some scientists and researchers still believe this; however, others now think this is not the case. Instead, recent research has shown that instead of binding to either receptor, CBD modifies the receptors’ ability to bind to cannabinoids and enhances natural levels of endocannabinoids.

What Is CBD Commonly Used to Treat?

Because of the limited research available on CBD and CBD treatments, it’s still too early to claim CBD as a cure or treatment for any condition. Nevertheless, users still tout CBD’s positive effects in treating several conditions, including:

One of the most well-researched aspects of CBD treatment is its effect on epileptic patients, including children. According to Harvard Medical School, CBD has shown promise in treating seizure and epileptic disorders, including hard-to-treat childhood epilepsy syndromes like Dravet syndrome and Lennox-Gastaut syndrome (LGS).

A study with animal models, published in the European Journal of Pain, also indicated that CBD could be useful in treating arthritic pain. Many arthritis patients have also praised the compound’s ability to manage  their pain.

Like many aspects of CBD, its legality remains unclear and vague.

While many users feel that CBD has little to no side effects, research has indicated otherwise. The following side effects of CBD are possible:

Other risks of CBD use include:

How Is CBD Taken?

Where Can CBD Be Purchased?

CBD use and availability have grown exponentially since the passage of the 2018 Farm Act. In most parts of the country, it’s not hard to find a shop advertising its sale of CBD products. CBD sodas, oils, and creams can be found in many drugstores, malls, and specialty CBD shops. These products are also widely available online.

The most reputable sources for CBD products are usually professional and well-run marijuana dispensaries that test their products. Specialty CBD shops often offer transparency into where their CBD products are grown and produced, along with regular testing.

As for online shoppers, searching the web for well-known CBD brands can ensure that consumers are purchasing safe and quality products.

Cannabidiol (CBD) – What We Know and What We Don’t. (August 2018). Harvard Medical School.

What You Should Know About THC in Cannabis. (August 2019). Verywell Mind.

What Is CBD? Every Question About the Buzzy Weed Derivative, Explained. (July 2019). Prevention.

What Is the Endocannabinoid System? (April 2019). Verywell Health.

Trial of Cannabidiol for Drug-Resistant Seizures in the Dravet Syndrome. (May 2017). New England Journal of Medicine.

CBD Oil: Is It Safe to Use During Pregnancy and Breastfeeding? (September 2019) What to Expect.