People who are transgender have a different gender identity than the one they were assigned at birth.

Some people may not identify as male or female, but for this guide, the focus will be on male-to-female and female-to-male transition medications. (Learn More: How Hormonal Transition Treatments Start)

As with all medical decisions and treatments, those who are able to start treatment for the transition process may have to deal with side effects. (Learn More: Are There Side Effects to Medications or Transitioning Treatments?)

Depending on what you choose, your transition may involve steps other than hormone therapy and medication. (Learn More: Are Medications the Only Step in Transitioning?)

Steps Taken Before a Medical Transition

Transitioning begins before receiving hormones or medications of any kind. First, you will likely have to talk to a psychologist per guidelines set by the World Professional Association for Transgender Health (WPATH).

A psychologist will then diagnose you with gender dysphoria, also known as gender incongruence. This is not considered a mental illness, but it is a confirmation of stress felt by those whose assigned gender does not match their gender expression.

A therapist then writes a letter of recommendation for those eligible to start hormone therapy. At that point, you may choose to live as the gender you identify as (if you weren’t already doing so), and you may decide to start researching surgery options as well.

Hormones are the main medications used during the transition phase. The process and changes seen are gradual. Many factors can influence how quickly they work for each patient, such as:

The University of California San Francisco’s Center for Excellence for Transgender Health says that a transition should be seen as a “second puberty.” It can take a few years to see and feel the results of hormone therapy.

Everyone is different, so dosages and medications vary by patient. The goal of hormone therapy is gender congruence, ensuring that your exterior gender characteristics match your gender identity. 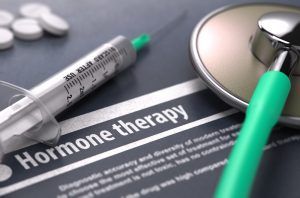 Starting this therapy at a younger age may prevent changes in your voice’s pitch and the amount of body hair you grow. Younger patients may start hormone therapy around age 16.

Hormone therapy can be done alone or along with surgery. Not every transgender woman will choose or be eligible for feminizing hormone therapy and/or surgical procedures.

Transgender women who have had surgery to remove their testes will have the dosage of their medication lowered because they will not need as much estrogen to maintain traditionally feminine features.

Transgender men take testosterone to develop traditionally male characteristics. This may be used alone or along with surgery.

The goal of testosterone hormonal therapy is to promote changes that allow you to take on characteristically male attributes. These include:

Side effects of testosterone therapy include:

Gender reassignment surgeries can include:

What medications are used for those who are transitioning?

Hormones are the most commonly used medications for people who are transitioning. Transgender men take testosterone to develop traditionally male features, such as more angular features, redistribution of body fat, changes to muscle mass, and facial hair. Some men will find that their voices change, but others may need vocal practice or additional help to develop a deeper pitch.

Transgender women are given estrogen so they can develop female characteristics, such as body-fat distribution, a decrease in facial and bodily hair, and, possibly, breast development. In some cases, transgender women may be given progesterone to improve their mood and libido.

Are there any side effects of hormone therapy?

Yes; transgender women may gain weight, have mood swings, and experience hot flashes during therapy. You will be monitored to ensure your liver is healthy, to prevent diabetes, and to ensure you do not have excess potassium in your blood.

Does the transition process end with hormone therapy?

Not necessarily. Some transgender people are eligible for surgeries, such as breast implants, facial reconstructions, or vaginoplasty for transgender women.

Transgender men may decide to get chest reconstruction surgery to remove breast tissue. They have several options that allow them to have a penis, such as a phalloplasty or metoidioplasty.

What Do I Need to Know About Transitioning? (2019). Planned Parenthood.

What to Expect From Gender Confirmation Surgery? (December 2018). Healthline.