When someone leaves their own country and travels abroad specifically to receive medical care, that’s called medical tourism. There is a multitude of reasons why people choose to go this route rather than staying within their own country’s borders, ranging from financial or insurance reasons, or seeking a professional who is an expert in a certain health problem. Some parts of the world are well-known as popular medical tourism destinations, and some procedures are more common, also.

Why do people consider medical tourism? What are its pros and cons? There is a lot to consider before a decision of this magnitude can be made. We’ll explore popular destinations, costs involved, and how medical tourism actually works.

Who Travels for Medical Care?

Leaving the United States to travel abroad for medical care isn’t something that many people do on a whim. It takes time to research providers for the desired medical procedure and arrange for the travel itself, which includes obtaining a passport, booking flights, deciding on where to stay, and arranging for care after the procedure itself.

According to the Centers for Disease Control and Prevention, medical tourism generally includes three different types of patients. There are those who travel for medical care because the treatment is cheaper in another country. Also, immigrants may choose to travel to their home country to receive treatment. Still others partake because their desired treatment may not be available in the U.S. 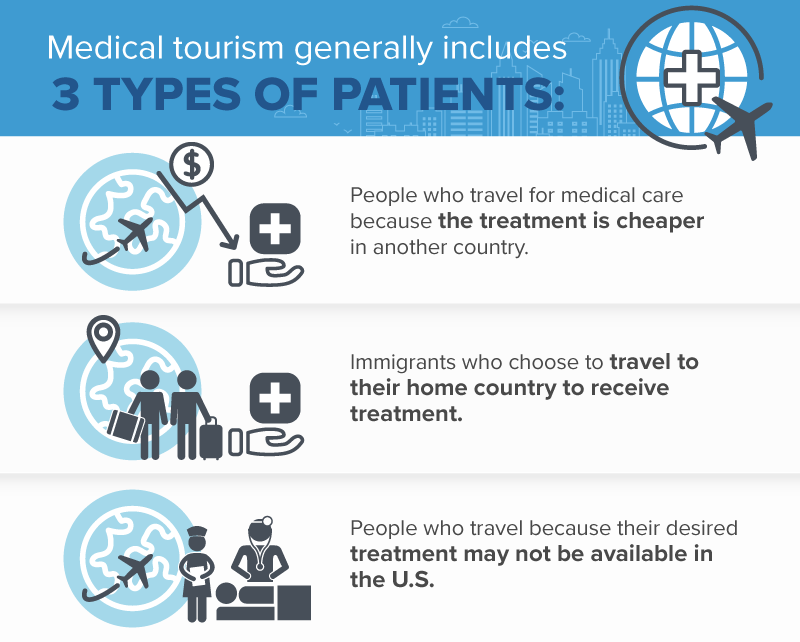 Due to different reporting standards from country to country, it can be difficult to quantify exactly how many people participate. According to the World Health Organization, some countries count actual visits of foreign patients to the hospital, while others count those who just enter the country. Also, some countries don’t note a patient’s place of residence, which can obscure those who return to their home country for treatment.

However, they’ve estimated that out of all international patients receiving medical care, around 35 to 45 percent of all travelers who receive medical care in foreign countries are participating in medical tourism specifically, as opposed to diaspora going home to seek care or emergency medical care that happens during regular travel. Some estimates do put the number of U.S. travelers seeking medical care elsewhere at anywhere from 150,000 to 320,000 people each year. 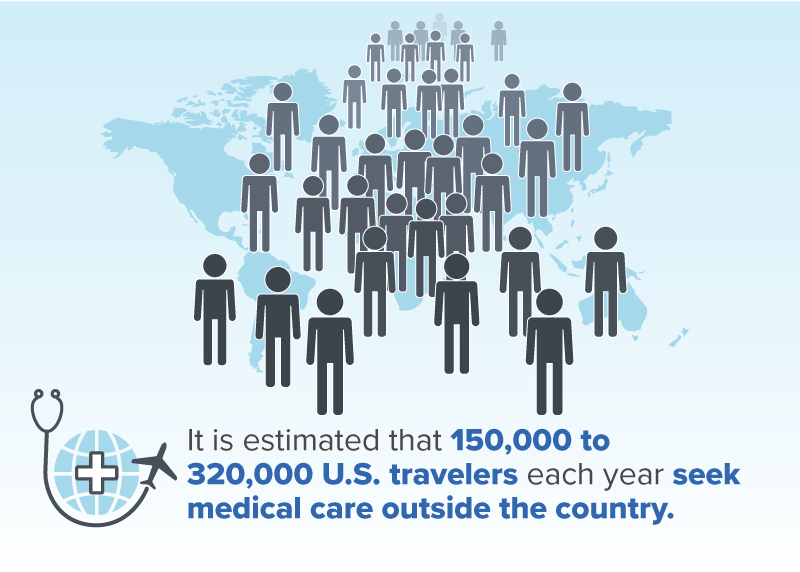 One of the biggest pros of medical tourism involves cost savings. Around 8.8 percent of people in the U.S. did not have health insurance in 2017, and for the uninsured, medical care can be very difficult to afford, particularly if there is a specific need for a certain procedure, such as a hip replacement. Medical procedures and health care in the U.S. are quite a bit more expensive than in other parts of the world, which can make it hard or impossible to get the medical care people need. For example, in 2014, the average cost of one hospital stay in the U.S. is around $5,220, while in Australia, the price is much less expensive at $765. 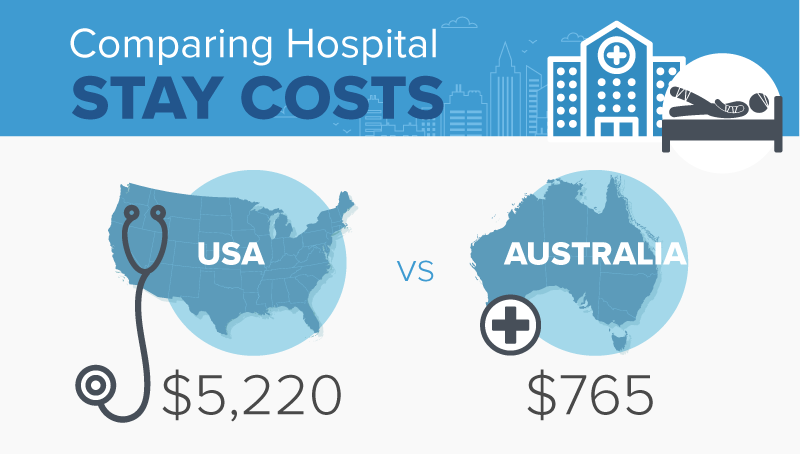 The cost of individual procedures is also less expensive around the world than in the U.S. Coronary bypass surgery, one of the most common reasons for medical tourism, is over twice as expensive in the U.S. than it is in other wealthy countries such as Switzerland or Australia. 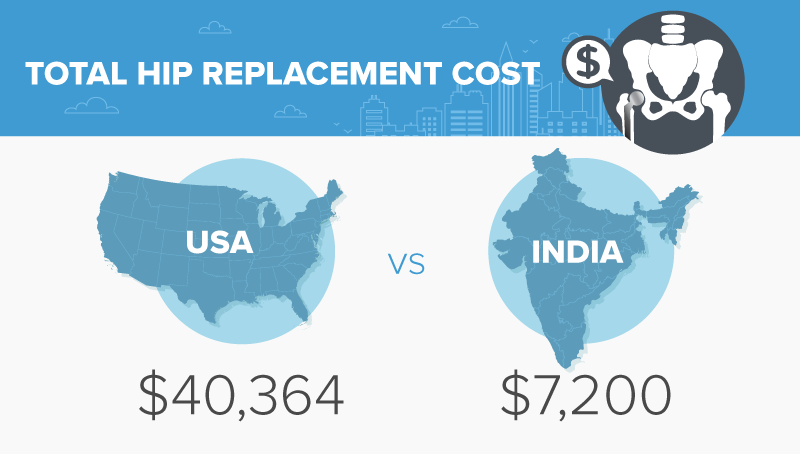 There are a few issues that can arise as a result of medical tourism. Depending on the destination and local language, communication can be an issue. Shared information is crucial in a medical setting for both the patient and the doctor, and if a person seeks medical care in a setting where they’re not fluent in the language spoken, it can have a significant impact on how well the information from the medical team is understood. Understanding the procedure is one aspect that is vital, and follow-up information is equally as important. Patients need to know what to expect after a procedure and what might lie outside the realm of normal. Also, aftercare instructions allow the patient to care for their wound properly and hasten healing. Any interruption in the flow of communication can greatly impact health during and after the recovery phase.

Also, there is the possibility that medications in other countries aren’t as high quality as those in the U.S. The Food and Drug Administration prohibits the import of medications into the black market in the U.S. for a variety of reasons, including the fact that some drugs don’t have the same quality as those available here. Also, there are concerns that there isn’t enough known about the drug’s origins or content, and could include medications that have been banned in the U.S. for severe side effects. Issues can be present with drugs available in other countries for the same reasons – unknown quality, questionable origin, or dangerous side effects.

Antibiotic resistance is another concern medical tourists should be aware of. Antibiotic resistance rates vary from country to country, as reported by the WHO, which has implemented a plan to monitor drug resistance around the world and decrease its incidence. They found that resistance to at least one commonly-used antibiotics ranged from 0 percent to 82 percent, which is a very large range. A quick glance at a map developed by the Center for Disease Dynamics, Economics & Policy shows that some countries, such as India and Russia, have pretty high resistance to certain antibiotics. This could be a concern in the event of a post-procedural infection that requires antibiotic use, such as what happened to patients who had surgery at a certain hospital in Mexico in August 2018.

Finally, boarding an airplane and flying home after surgery can raise the risk of blood clots for those who have had a procedure. While flying, it’s normal to be sedentary, which is really compounded during a long flight. This reduces the blood flow from the legs back to the heart, which can result in clots forming in the legs, and can be really problematic on flights that are 8 to 10 hours long (or longer). Known as deep vein thrombosis, it can cause pain and swelling in the leg, or break away and travel to the lungs, which can be fatal if not treated. It’s even more of an issue following a surgical procedure when the risk of developing clots is elevated for 4 to 6 weeks after surgery.

Some of the most popular destinations for medical tourism include Thailand, Mexico, Singapore, India, Malaysia, Cuba, Brazil, Argentina, and Costa Rica. Singapore, for example, welcomed around 850,000 international patients in 2012 and generated $3.5 billion worth of revenue. The most common types of procedures include cosmetic surgery, cardiac surgery, dentistry, orthopedic surgery, and oncologic (cancer) care.

There is quite a difference in costs of many of these types of procedures, as outlined above, but elective cosmetic plastic surgery is one of the top targets because insurance doesn’t normally cover its costs unless it is a result of an accidental injury or improves the function of a body part.

Cosmetic plastic surgery is certainly a booming business in the U.S., with a reported $16.5 billion spent by Americans within their own country in 2018. If the procedures are less expensive in a different country, then it’s not too far of a stretch to imagine that people might be interested in saving some money and traveling abroad for surgery. 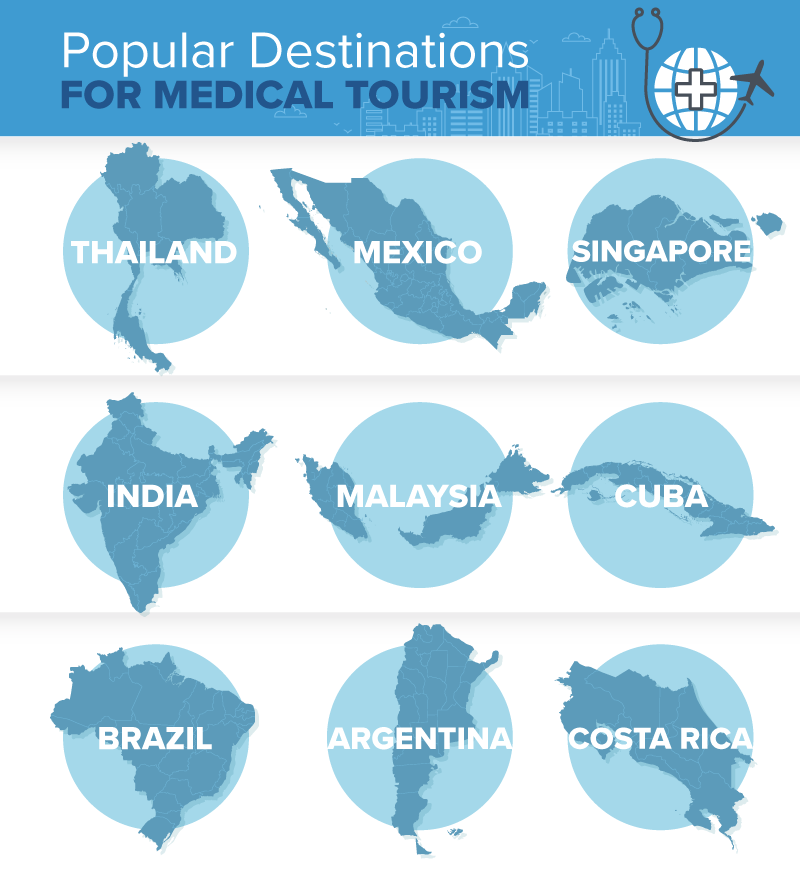 It’s important to discuss the intention of medical tourism a physician. There are doctors that specialize in travel medicine, and the CDC recommends a visit with this type of physician at least 4 to 6 weeks prior to departure to talk about the trip itself and the travel involved. It’s also important to discuss the procedures involved and how they might impact travel plans. Also crucial is ensuring any current medical conditions are well under control, and that regular doctors are aware of the plans for travel and international medical care.

It’s important to check and verify the credentials of the healthcare providers as well as the facility where the procedure will be completed. A written plan with the healthcare team and facility is also vital, as it will outline what treatments, supplies, and medical care are included in the costs of the visit.

Take medical records along, including any lab or radiology reports that are related to the condition that will be treated in this country, and have a plan in place to deal with any language concerns in case communication problems arise. This can include something as involved as hiring a translator or having internet access to run a translation app on a phone or tablet. It’s also vital to verify if typical vacation activities, such as swimming or drinking alcohol, are permitted after the procedure.

Finally, it’s very important to obtain copies of all medical records before returning home. Upon returning home, visit a care provider to go over records and confirm that everything went according to plan – and there are no concerns that need to be addressed.

Medical tourism and the future

Medical tourism is not going away any time soon, and traveler numbers have been on the rise over the last decade and aren’t likely to slow down. While there are international travelers coming to the United States for healthcare (stemming from the Caribbean, Europe, and Central America), but there are plenty leaving for foreign shores as well. There are even specialist hospitals that exclusively cater to foreign patients, and India has developed a special class of visa specifically for medical tourists.

It’s critical for those considering medical tourism to research destinations, clinics, physicians, procedures, and plans before deciding to participate. And it’s also important to keep a line of communication open with all care providers – abroad and back home – to make sure everything goes as smoothly as possible. Medical tourism is here to stay, and could be a viable option for those who are hoping to save some money on cosmetic plastic surgery – or something far more serious, such as a joint replacement or heart surgery.

How do healthcare prices and use in the U.S. compare to other countries?. (May 8, 2018). Peterson-Kaiser Health System Tracker.