There is some encouraging research that suggests that some cannabinoids (products that are derived from the cannabis plant) may inhibit cancer cell growth and may even kill cancer cells, but the research is still preliminary. (Learn More – Some Encouraging Research)

Cancer is the dreaded disease that results in the proliferation of abnormal cells in your body. (Learn More – What Is Cancer?)

Marijuana has been used as an herbal remedy for many years and may have some medicinal uses. (Learn More – What Is Marijuana?)

At the time of this writing, there are several marijuana compounds that are used medically. (Learn More – Marijuana Compound Drugs)

There are also some other substances that are derived from marijuana that may eventually succeed as medical treatments. (Learn More –Other Forms)

Products like CBD are best utilized as complementary forms of treatment. (A Complementary Treatment)

Research regarding the use of cannabis products and the prevention of cancer is mixed at best. (Learn More – Can CBD Prevent Cancer?)

Most of the major organizations take the position that using CBD or other cannabinoids to treat cancer is not supported by research at this time. (Learn More – How Does the American Cancer Society View the Situation?)

One of the biggest issues regarding funding for further studies is the DEA’s stance on marijuana. (Learn More – Limitations on Research)

Although proponents of CBD report that it is totally safe to use, it has some side effects that may be dangerous. (Learn More – Side Effects of CBD)

Given the current situation, more research needs to be done before CBD or any other cannabinoids can be used as a treatment for cancer. (Learn More – The Bottom Line?)

Spanish biologist Christina Sanchez and colleagues determined that injecting substances derived from marijuana plants into cancer cells may inhibit their growth, and even kill them off.

The cannabis products used in these research studies were THC (tetrahydrocannabinol) and CBD (cannabidiol). These products are derived from the cannabis plant Cannabis sativa. CBD appears to have the best applications, according to clinical trials. 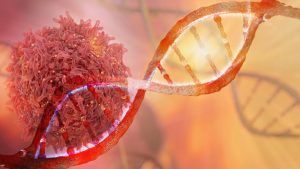 spreads and advances to different parts of the body. It can disrupt bodily functioning and cause death.

Cancer is not just one disease. It is many different diseases that share these same general characteristics.

Marijuana comes from the cannabis plant. It has been used as an herbal remedy by many different cultures for centuries. It has also long been used for recreational purposes.

There are hundreds of active components in marijuana, known as cannabinoids. The two most studied components of the cannabis plant are THC and CBD.

Some cannabinoids have been approved by the Food and Drug Administration (FDA) for the treatment of certain medical issues.

In 2018, the FDA approved the drug Epidiolex (cannabidiol [CBD]) to treat seizures that result from very rare forms of epilepsy.

Marinol (dronabinol) is a synthetic form of THC that is approved by the FDA to treat nausea and vomiting caused by chemotherapy. It is also used to address weight loss and poor appetite in people who have AIDS.

Cesamet (nabilone) is a synthetic cannabinoid that is very similar to THC. It can be used to treat nausea and vomiting that result from chemotherapy.

CBD’s ability to address a multitude of medical issues is currently being studied.

Nabiximols is a spray designed to be taken orally that is composed of equal proportions of THC and CBD. It is available in some European countries and Canada to address the pain associated with cancer and multiple sclerosis (MS). At the time of this writing, it is not approved to treat any medical conditions in the U.S.

What Does the Research Say About Marijuana & Cancer Treatment?

Research has suggested that some cannabinoids, such as THC and CBD, may slow the growth of cancer cells and may kill some cancer cells. These drugs are typically injected directly into the cells.

CBD may also be able to address issues with anxiety and even psychosis, but the research regarding its ability to do so is limited. More research must be done before a conclusion can be drawn.

According to the National Cancer Institute (NCI), a division of the National Institutes of Health, the available evidence regarding cannabis therapies and cancer treatment suggests that, at this time, CBD and other cannabis derivatives are best utilized as complementary treatments. This means that they assist other established treatments.

CBD and other cannabinoids appear to assist with:

NCI reports that it reviewed numerous studies investigating the link between CBD and cancer prevention. Some of the older research found that cannabis use did not increase the risk of developing cancer, but some individuals who used cannabis and did not use tobacco products had an increased risk of prostate cancer.

Other studies found that cannabis users had a lower risk of developing certain forms of cancer, like bladder cancer. However, these findings need to be replicated.

NCI’s stance is that despite some research showing that injecting THC or CBD directly into cancer cells can slow the rate of growth or even kill the cells, long-term studies need to be performed to determine the role of CBD in the prevention of cancer.

The Outlook for CBD & Cancer Treatment

Currently, there are no large-scale clinical trials that are investigating the use of cannabinoids in cancer treatment. 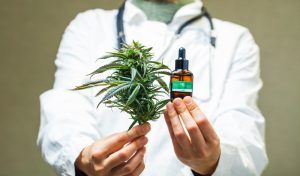 Most of the research involves small pilot studies that are designed to develop larger investigations. The pilot studies suggest that the use of CBD in treating cancer is promising, but no definite approach has been determined.

Studies on the success of injecting CBD or THC into cancer cells are not sufficient to get approval for oral forms of CBD, THC, or other cannabinoids to treat cancer. The approval process is long and complicated.

How Does the American Cancer Society View the Situation?

The American Cancer Society formally states on its website that it supports the need for more scientific research regarding the benefits of cannabinoids for cancer patients.

It recognizes the need for more efficient therapies to treat cancer, but like most other organizations, it considers the current body of research on the use of cannabinoids and cancer treatment to be preliminary.

There is a major obstacle to investigating the use of marijuana products in the treatment of cancer.

The federal government’s stance on marijuana is a significant roadblock that stands in the way of further research. Special permissions are required by research facilities in order to use Schedule I substances.

Side Effects of CBD

Despite claims made by many proponents of CBD that the substance has no side effects, the research on CBD refutes this.

Although the cannabinoid receptors in the brain differ from many of the other receptors, and CBD may have a lower risk of many side effects, there are still some potential side effects recorded. There appears to be no apparent lethal dose of CBD.

Some of the side effects that have been reported include:

Some speculate that CBD can interact with different medications. It may produce liver damage when taken with certain medications, including some antibiotics, antidepressants, anti-anxiety medications, chemotherapy drugs, sedatives, and muscle relaxants.

Despite certain claims made by proponents of CBD, the state of the research investigating the use of CBD as a cancer treatment is still in its early stages. Small pilot studies that show CBD kills cancer cells are not enough to get approval to use CBD as a primary treatment for cancer. Larger studies are needed.

Cannabinoids may have medicinal uses as complementary treatments for cancer to address pain, appetite issues, and inflammation. Always discuss medicinal substances with your physician before using it.

Cesamet. (May 2006). Food and Drug Administration.