Telemedicine was first conceived as early as 1879, when rudimentary developments in the telephone and radio introduced the idea of delivering health care over cables. (Learn More) One of the pioneers of this era was Hugo Gernsback, who created the first prototype for what we might recognize as a telemedical device. (Learn More)

In the 20th century, NASA contributed vast amounts of resources to develop telemedicine, with an eye on using the technology to provide medical services to astronauts. (Learn More)

The History of Telemedicine

The first mention of health care coming to the home goes as far back as an 1879 article published in the Lancet journal, where researchers speculated that the then-new telephone could reduce unnecessary visits to doctors’ offices.

In 1925, Science and Innovation magazine published an issue where the cover showed a doctor offering a diagnosis over the radio. The article itself imagined a device that would someday allow the doctor to conduct an examination via video over a long distance.

Telemedicine sounds like a relatively recent development in health care, but a rudimentary form of it was practiced as long ago as the 1920s, when doctors used radios to give medical advice to clinics on ships.

Another significant development in telecommunications that set the wheels in motion for telemedicine was the development of the telephone itself. Soon after Alexander Graham Bell placed what could be called the first telephone call in March 1876, scientists began wondering how else the revolutionary new technology could be applied. But the Smithsonian magazine writes that it was not until 1925, when Hugo Gernsback, a radio and publishing entrepreneur, hypothesized that the doctors of the future would move beyond the telephone, and into radio and television, to reach their patients.

Gernsback was a pioneer himself. He designed the first home radio set, started the world’s first mail-order radio business, and published the first radio magazine in the world. Another magazine started by Gernsback saw him hypothesize a device he called a “teledactyl,” where doctors would not only see their patients through a viewscreen, but also physically touch them with robotic arms. While the latter has not come to pass, the former is one of the most well-established predictions of what we today call telemedicine.

Despite Gernsback’s predictions, telemedicine was still a distant dream in the early 20th century. Scientific advances during World War II helped civilian researchers send radiology images over 24 miles of telephone lines in Pennsylvania. During the 1950s, the University of Nebraska made the first foray into what we might technically call telemedicine, sending the results of neurological exams over cable wires. 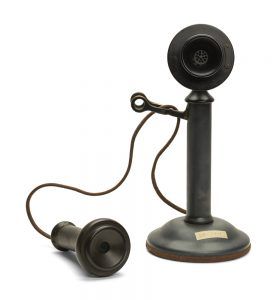 The official journal of the American Telemedicine Association gives some more history. In 1957, a Canadian doctor constructed a teleradiology system in Montreal. He sent radiographic images from one hospital to another five miles away through coaxial cable.

Ten years later, doctors at Massachusetts General Hospital in Boston demonstrated a “comprehensive system for remote diagnosis,” which they referred to as “telediagnosis.”

A decade later, the Nebraska Psychiatric Institute and Norfolk State Hospital connected to each other via closed-circuit television to collaborate on consultations, which was hailed as a major step forward at the time.

At this point, using telemedicine was considered to be worthy of legitimate scholarly research. The journal Anesthesiology carried its first published report on the idea of remotely monitoring patients’ vitals.

By the end of the 1970s, NASA and the Nebraska Psychological Institute worked together to develop telemedicine as a form of health care delivery.

Into the 1980s, NASA was a key driver in the advancement of the practice, often using their own projects to explore the reaches of telemedicine. For example, the Space Technology Applied to Rural Papago Health Care program, where mobile support units located in a rural reservation connected with doctors based in Indian Health Service hospitals. As much as this benefited the residents of the reservation, Harvard Business Review explains how it also gave NASA key insights in how astronauts could receive medical attention from thousands of miles away.

During the 1980s, telehealth was again paired with radiology when images were used for consultations.

In the 1990s, the advent of the internet changed everything almost overnight.

Modern innovations in consumer and business technology mean that the telehealth devices used today are of a much smaller size and have a much greater scope of features than the equipment that was used during the early days of the practice. Patients can wear fitness wristbands and heart rate monitors, and doctors can see real-time results and have face-to-face conversations with their patients over a smartphone.

More science fiction-like designs, such as smart glasses, push the boundaries of technology and health care even further. A digital health startup based at Stanford University has examined how Google Glass can digitally transcribe patient records during a medical exam. Doctors wear the glasses during appointments, and verbal cues can instantly call up the patient’s electronic medical records. The glasses come with a built-in camera and a microphone, which live-stream the conversation so it can be automatically transcribed and saved into the patient’s records.

Big Business in the Golden Age

Telemedicine is being taken very seriously. In 2016, the Department of Health and Human Services’ Health Resources & Services Administration awarded $16 million to four programs to develop the use of telehealth services for veterans and other patients living in rural areas. The money was also allocated to help providers better understand the health care needs of rural communities.

The Associate Administrator for HRSA’s Rural Health Policy stated that the aim of funding telemedicine outreach programs was to invest in collaboration among different providers of health and social services, with a focus on sharing resources, expertise, and innovations.

The late 2010s might be considered a golden age of telemedicine research. Jackson Healthcare predicted a total of 7 million telemedicine users by the end of 2018. Upwards of 90 percent of health care executives reported working on some kind of telehealth delivery platform in 2014.

The Future of Telemedicine

The Journal of Telemedicine and Telecare suggested that the question for the future is when — not if — telemedicine will “become part of the standard of care.” Continuing advancements in technology mean that telemedicine products and services will continue to offer a hard-to-argue alternative to conventional health care, to the point where it might improve clinical outcomes. This is exceptionally the case in industrialized countries, said the journal, where telehealth will shift the focus of health care delivery away from the hospital or clinic and into the home.

This benefit will also extend to developing countries or places where there is limited health care infrastructure. Researchers believe that in the future, telemedicine will be used to improve the connections between providers at health centers and patients in referral hospitals and other locations.

Regardless of where it takes place, the future of telemedicine will be based on technology, economics, and human involvement. Technology and human behavior intersect in many different ways — individually, organizationally, and societally. In places where there are personnel shortages and economic depression, technology-enhanced health care can fill a massive void.

The researchers in the Journal of Telemedicine and Telehealth concluded that as technology approaches realms only seen in science fiction — everything from nanotechnology to sensor devices — the way human beings work with that technology and with each other will also change. This means that the way health care is delivered in the future might look nothing like it does now, and it will almost certainly bear no resemblance to the practice of health care in the 20th century.

As communication technologies and information storage grow in scope and functionality, the implications for telemedicine suggest unheard of potential for patients and doctors alike.

The Evolution of Telehealth: Where Have We Been and Where Are We Going? (November 2012). The Role of Telehealth in an Evolving Health Care Environment.

Evolution and Current Applications of Telemedicine. (1996). Telemedicine: A Guide to Assessing Telecommunications in Health Care.

The Empirical Foundations of Teleradiology and Related Applications: A Review of the Evidence. (November 2016). Telemedicine Journal and E-health.

The Rise of Telemedicine: Implications for Doctors in 2018. (February 2018). Medium.