The prostate gland is part of the male reproductive system. (Learn More)

As you age, your prostate may grow and interfere with your ability to urinate by putting pressure on your urethra. (Learn More) The major symptom of benign prostatic hyperplasia (BPH), or enlarged prostate, is difficulty urinating. (Learn More)

The cause of BPH is not well understood, although there are several theories on what causes it. (Learn More) There is a formal diagnostic approach to identifying an enlarged prostate. (Learn More)

Medications are commonly used to treat the symptoms of BPH. The two major classes of medications are alpha blockers and 5-alpha-reductase inhibitors. (Learn More)

Recently, the drug to treat erectile dysfunction, Cialis, was also found to address symptoms of an enlarged prostate. (Learn More) All medications have side effect profiles, but Cialis is typically associated with only mild side effects (Learn More)

In cases of moderate to severe BPH, surgery may be needed. (Learn More)

There are many alternative treatment approaches for BPH, including herbs and other substances. These are not approved by the FDA, and they are rarely effective. (Learn More)

What Does the Prostate Do?

If you are a male, your prostate is part of your reproductive system. This walnut-sized organ is positioned in front of the rectum right below your bladder. It goes around the urethra, the tube-like structure that transfers urine from the bladder through the penis.

The major function of the prostate is to produce the fluid that helps to compose your semen. The fluid from the prostate mixes with semen and moves into the urethra during sexual activity. 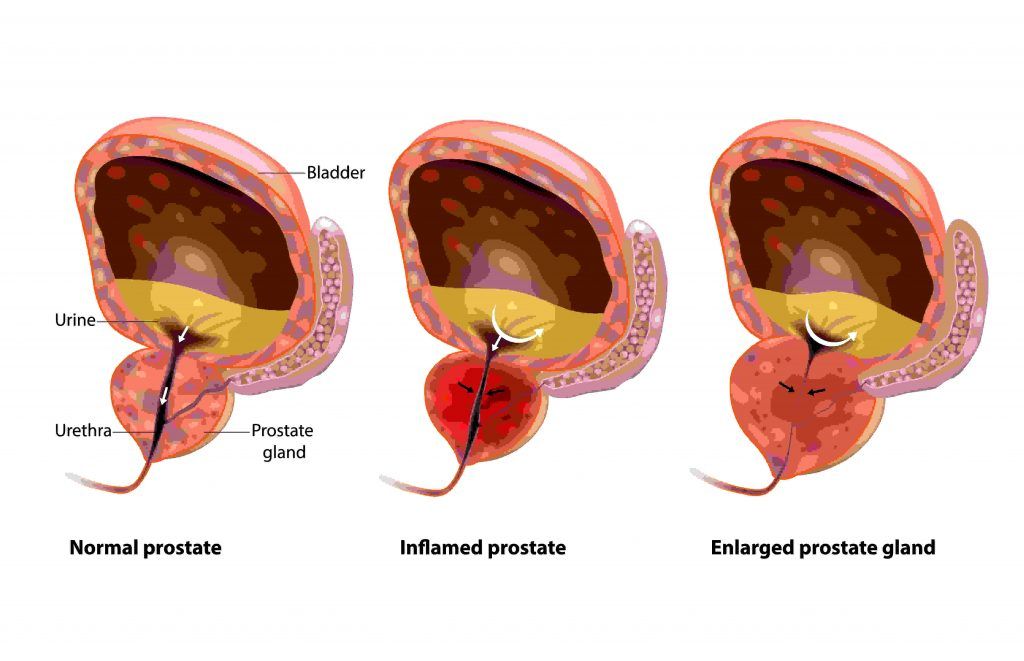 An enlarged prostate or benign prostatic hyperplasia (BPH) is the result of a second phase of growth that begins around age 25 and may continue throughout the rest of  life. The first phase of prosthetic growth typically occurs around puberty.

Most cases of enlarged prostate or BPH are benign (not cancerous), but cancer can occur in the prostate. About half of men between the ages of 51 and 60 have BPH. As many as 90 percent of men over age 80 have BPH.

As your prostate gets bigger, it may squeeze your urethra. Your bladder walls may become thicker. The bladder may weaken and lose its ability to fully empty itself, leaving some urine in your bladder.

If your urethra is narrowed due to an enlarged prostate, you may experience various issues.

Symptoms of an Enlarged Prostate

The following are some of the other symptoms:

The cause of BPH is not well defined, but it is most common in older men, so it is believed that issues related to aging, particularly with the testicles, may have a causal effect associated with its development.

The changing proportions of testosterone and estrogen in the body as you age may also result in the increased growth of the prostate.

If your enlarged prostate is not addressed, it may lead to infections, bladder damage, and/or kidney damage.

Diagnosis of an Enlarged Prostate 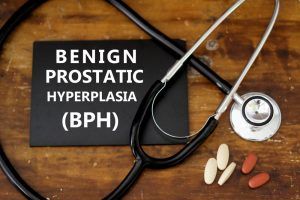 There is a formal BPH symptom score index developed by the American Urological Association that can help to diagnose BPH.

Blood tests, urine tests, and other tests, such as prostate-specific antigen tests (PSA tests), can rule out other potential causes of the symptoms you are experiencing.

Medications Are Common Forms of Treatment

For mild to moderate symptoms associated with BPH, the most common forms of treatment are medications. Several classes of medicines can address the symptoms of BPH.

The major medications include:

In hard-to-treat cases, combining an alpha blocker and a 5-alpha-reductase inhibitor may be the best approach.

Cialis (tadalafil) was developed to treat issues with erectile dysfunction (ED). Researchers learned that it also resolves symptoms of BPH. It was approved by the Food and Drug Administration for the treatment of people who have both ED and BPH in 2011.

Cialis is believed to work by increasing levels of a chemical known as cGMP, or cyclic guanosine monophosphate. This substance increases blood flow to the penis (acts as a vasodilator), and this addresses the symptoms of ED. It also appears to relax the muscles in the prostate and bladder, and this may reduce the symptoms of BPH.

Research studies found that taking as little as 5 mg on a daily basis resulted in improvements for both ED and BPH, even if you have BPH without ED.

Are There Side Effects From Cialis?

In most cases, Cialis is associated with mild side effects. They may include the following:

Cialis may reduce blood pressure. If you are taking a medicine for hypertension, you should not take Cialis.

In very rare cases, some men have experienced vision or hearing loss. These symptoms are serious. If you experience them, you should contact your physician immediately.

Cialis should not be used by people with certain medical conditions, such as liver damage. Check with your physician regarding the use of Cialis for BPH.

Alternative Treatments for an Enlarged Prostate

There are numerous over-the-counter supplements and herbal remedies that are reported to address the symptoms of an enlarged prostate, such as saw palmetto and other herbs. You may hear these advertised on the radio, on TV, or online. Research studies have found that these treatments work no better than a placebo in most cases.

Surgery Can Be an Option

In cases of moderate to severe BPH where medications are not effective, surgical procedures can be used to address your symptoms or even remove the prostate in severe cases.

What Is the Prostate Gland? (January 2018). Medical News Today.