The gastrointestinal system is responsible for converting digested food into energy and nutrients for the body. (Learn More)

It can be affected by a poor diet and a family history of conditions, such as gastroesophageal reflux disease, which occurs when stomach acid builds up. (Learn More) Other problems include a buildup of hard deposits in the gallbladder and an inability to digest gluten. (Learn More)

Gastrointestinal issues are usually treated by dietary changes and medication. Surgery is typically reserved for the most serious cases.

What Is the Gastrointestinal System?

The job of the gastrointestinal (digestive) system is to provide energy and nutrients to the body, which it does by ingesting food, moving the food across various parts of the system, digesting the necessary nutrients, and excreting waste products.

Unfortunately, there are many issues that can develop with the proper functioning of the gastrointestinal system, the effects of which can be anything from embarrassing and inconvenient to serious and life-threatening.

Some of these issues are borne from an unhealthy diet and lifestyle. Others are caused by a family history of these conditions. For certain conditions, the causes and origins are not fully known. 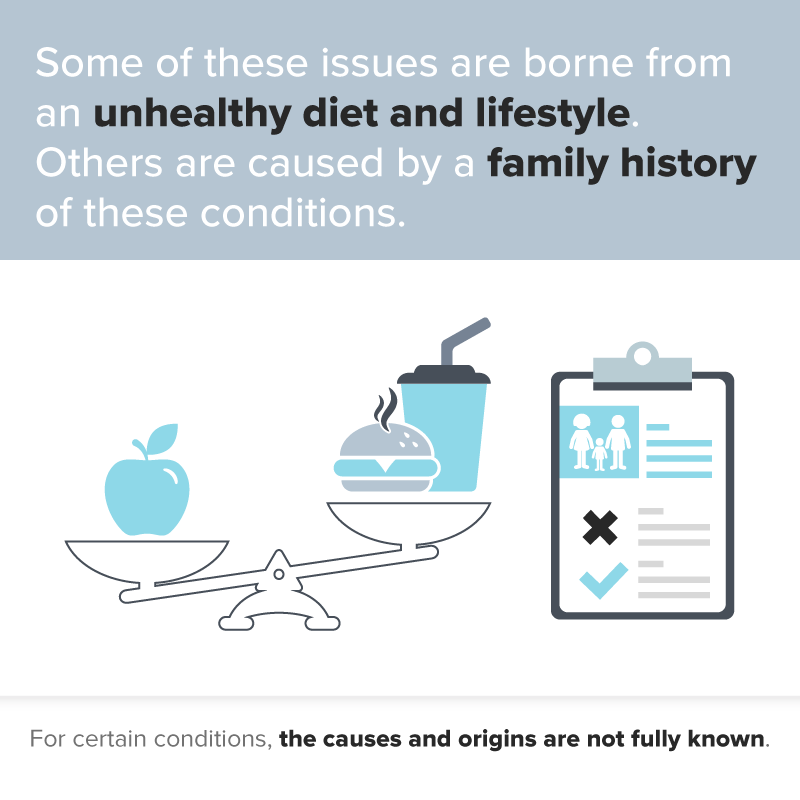 Depending on the nature and the severity of the conditions, treatment can be as simple as effecting necessary lifestyle changes, such as eating healthier, losing weight, and getting more exercise. In other cases, medications might help to break blockages and relieve pain.

Surgery is an option, to remove the affected parts of the gastrointestinal system or to remove other parts that might be affected by the same conditions at a later point in time.

Regardless of which form of treatment is used, most gastrointestinal issues can be prevented, resolved, and managed by a healthy diet (usually one rich in fiber, so lots of whole wheat, fruits and vegetables, and brown rice) and by cutting out unhelpful food and drink (fried food, artificial sweeteners, and excessive fiber).

People feel a burning sensation in their chest, usually after they finish a heavy or spicy meal, which is why this is also known as heartburn. Acid reflux is a very common occurrence for many people, and most people experience it on occasion. It is not dangerous, and it will usually resolve itself.

However, gastroesophageal reflux disease (or GERD) describes a situation where the burning sensations prove actively and disruptively painful, or a person experiences it multiple times a week. The National Institute of Diabetes and Digestive and Kidney Diseases writes that 20 percent of Americans suffer from GERD, which it calls a “chronic digestive disease.” In addition to heartburn, patients will also experience persistent bad breath, difficulty swallowing or breathing, and even tooth erosion.

Relief for gastroesophageal reflux disease is fairly easy to come by. Many people simply avoid consuming the foods and beverages that cause the condition. There are a variety of over-the-counter medications, such as antacids, that will reduce production of stomach acid, thereby lowering the chances of the esophagus being inflamed. Lifestyle changes, such as losing weight and quitting smoking, will also help.

In cases where GERD cannot be curtailed through lifestyle changes and medication, surgery is an option. Everyday Health warns that this should only be used as a last resort. 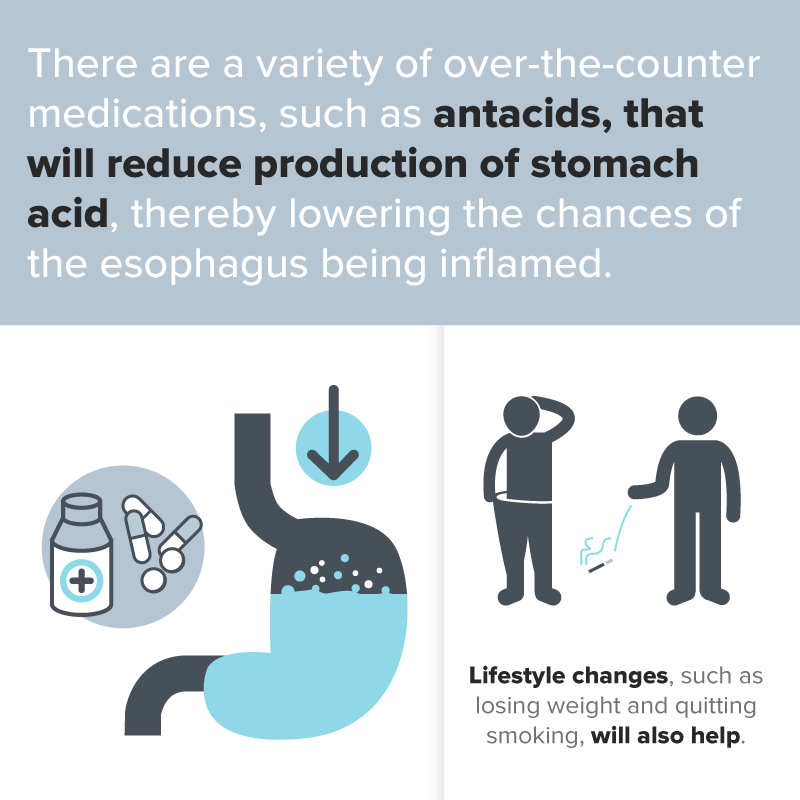 Gallstones originate in the gallbladder, a small organ that stores bile for use in digestion. Over 25 million people in the U.S. have gallstones, which are  hard deposits of the bile that form as the result of excessive waste of cholesterol in the bile. Additionally, if the gallbladder itself is in poor condition, this can lead to the formation of gallstones.

Over 1 million people are diagnosed with gallstones every year. About 25 percent of those cases need treatment, says the American Gastroenterological Association.

Gallstones are problematic because they block the connection between the gallbladder and the small intestine. This can cause intense pain in the abdomen. However, many people can develop gallstones without experiencing any symptoms, but there is the possibility that related pain will develop over time.

There are medications that will dissolve the gallstones. In severe cases, gallbladder surgery will remove the gallbladder itself (and with it, the blockage).

Celiac disease is very common in America. Around 1 in every 133 people have it. As many as 83 percent of the people who have celiac disease are undiagnosed — either because they don’t know that they have it or because it was misdiagnosed as another condition.

Gluten is a protein found in barley, rye, and wheat. Celiac disease is a sensitivity to that protein. If someone with celiac disease eats gluten, their immune system will overreact, damaging the structures in the small intestine that help to absorb nutrients from food. This results in serious symptoms.

This is due to a connection between the functions of the brain and the inability to properly absorb nutrients in food — a condition known as malabsorption. When the intestines are damaged, they are unable to filter all substances from passing through the digestive system and into the bloodstream. Some of these substances will impact brain function, which can present as depressive and neurological symptoms.

Some people might not have any symptoms at all — a condition known as asymptomatic celiac disease. It is not fully understood why these people will not show symptoms, while others will. Regardless of the presence of symptoms, a person who has asymptomatic celiac disease will still incur damage to their intestines if they consume gluten products, which will likely lead to many other problems. Even if a person with celiac disease does not get sick, they should seek treatment to ensure other complications do not arise.

The only known treatment for addressing celiac disease is to completely cut out gluten and eating gluten-free foods. Brown rice, amaranth, corn flour, soy flour, lentils, and quinoa are good alternatives to gluten.

Crohn’s disease is one of a number of digestive conditions that are called inflammatory bowel disease (IBD). Crohn’s disease can affect any section of the digestive tract, but it usually strikes the terminal ileum, which links the end of the small bowel with the beginning of the colon.

There are upward of 780,000 people in America who have some form of Crohn’s disease.

It is unclear what causes the disease, but current speculation suggests that people who have a family history of Crohn’s or related IBDs are at a higher risk for developing the condition themselves. Patients experience sharp abdominal pain, fever, diarrhea, rectal bleeding, and weight loss.

Immunosuppressants and topical pain relievers will help, but 75 percent of people with Crohn’s will usually need some degree of surgery to provide relief from their symptoms. Surgery is typically a last-resort treatment, but it might be necessary. People who have Crohn’s disease are at risk for developing colorectal cancer, and surgery to remove the affected parts of the digestive system might be considered to reduce the chance of cancer developing or spreading.

Additionally, Crohn’s disease can also create other complications that might require surgery, such as:

Any one of these problems would be considered a medical emergency. Surgery might be an option for a qualifying patient to cut down on the chance of one or more of these issues developing.

The compromised immune system of a person with ulcerative colitis will see food as a hostile invader, resulting in ulcers (sores) forming on the lining of the colon. Too-frequent bowel movements, painful diarrhea, blood in the stool, and abdominal cramps are signs of ulcerative colitis.

As with Crohn’s disease, medications can suppress the inflammation of ulcerative colitis, and a curated diet can also help. However, some patients may require surgery to remove the colon and take the inflammation with it.

Irritable bowel syndrome (IBS) is a common digestive condition, where people feel regular stomach pain at least thrice a month, for many months. It affects anywhere between 25 million and 45 million people in America.

The causes of IBS are not fully understood. Treatment is based on controlling the patient’s diet. Meals that are high in fiber and low in fat are recommended, as is avoiding any foods that produce gas, including dairy products, caffeine, alcohol, and artificial sweeteners.

Yogurt might help the symptoms of irritable bowel symptoms since it has probiotics (good bacteria). However, dairy yogurt and yogurt with artificial sweeteners can exacerbate IBS.

Irritable bowel syndrome can also be triggered by stress. Some mental health treatments, like cognitive behavioral therapy and antidepressants, can be useful. 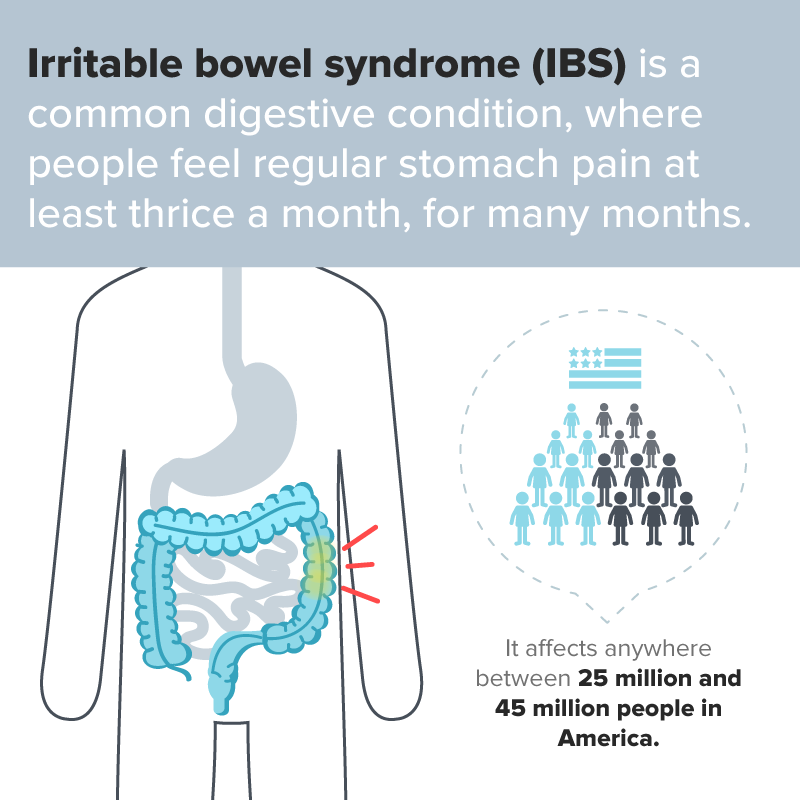 Hemorrhoids often show themselves as bright red blood during bowel movements. Distressing as they are, the National Institute of Diabetes and Digestive and Kidney Diseases estimates that 75 percent of Americans aged 45 and up have them.

They are caused by inflamed blood vessels at the end of the digestive tract, the result of diarrhea, constipation, and a lack of fiber in the diet that lead to painful and straining bowel movements.

The presence of hemorrhoids can be rectified by a healthier diet. Foods rich in fiber (fruits and vegetables) are a good place to start. Additionally, increasing water consumption and physical activity will also reduce the inflammation.

If dietary changes don’t work, a hemorrhoidectomy is a surgical procedure where the hemorrhoids will be physically removed.

Diverticulitis is a condition where small pouches (called diverticula) form on the colon. They occur at weak places in the lining of the digestive system. Symptoms of the formation of these pouches include fever and stomach pain, and they usually occur in older adults and obese people.

A milder form of the problem is known as diverticulosis, which is where the diverticula still develop, but there are no symptoms. It is only when the pouches become inflamed that they produce symptoms, at which point the diagnosis switches from diverticulosis to diverticulitis.

Notwithstanding diverticulosis being asymptomatic, it can still become a problem when too many of the diverticula pouches develop. The normally smooth processes of the bowels can be impeded. If left untreated, patients can experience symptoms that start off as simply annoying (flatulence and bloating). They progress to problematic (constipation and diarrhea) and then to actively dangerous (blood in the feces and anemia from repeated bleeding).

Even though diverticulosis might appear mild, a patient should seek treatment to ensure that it does not become diverticulitis and that the diverticula pouches (while still not inflamed) do not get in the way of the bowels doing their job.

If the diverticulitis is simple, it can be treated with nothing more than a clear liquid diet and antibiotics, which will help the colon heal. One potential cause of diverticulitis is a low-fiber diet, so a doctor may steer a patient toward vegetables, whole grains, and legumes (high-fiber foods) by way of treatment.

Severe attacks of pain might require surgery to excise the stricken sections of the colon.

If the patient has chronic fissures and other treatments do not work, the situation may require surgery, which carries its own risks.

Healthy Eating When You Have Digestive Problems. (June 2018). WebMD.

Celiac Disease Symptoms You Need to Know and How the Condition Is Diagnosed. (March 2018). Everyday Health.

Neurologic and Psychiatric Manifestations of Celiac Disease and Gluten Sensitivity. (May 2013). Psychiatric Quarterly.

How to Treat Celiac Disease With a Gluten-Free Diet and Supplements — and What Could Happen if You Don’t. (March 2018). Everyday Health.

Surgery for Crohn’s Disease and Ulcerative Colitis. Crohn’s and Colitis Foundation of America.

What Is Ulcerative Colitis? (January 2019). Healthline.

Bloating and Constipation: Side Effects of Coffee. (May 2014). The Body.

Is Yogurt Good for IBS? What to Look for in Yogurt Products and What to Avoid. (June 2017). Healthline.

Everything You Need to Know About Diverticulitis. (January 2018). Medical News Today.