Deep vein thrombosis (DVT) is when a blood clot occurs within the deep veins in the body. These clots, which usually occur in the lower leg or thigh, can break loose and get into the lungs. This causes a pulmonary embolism, which can be very dangerous. (Learn More)

Blood thinners decrease your blood’s ability to clot, preventing your clots from getting bigger or new clots from forming. These drugs come in an injectable and oral form, and they should be taken exactly as prescribed. (Learn More)

There are a few limitations to anticoagulants that are worth noting. First, they can be dangerous in rare cases. In the most serious instances, they can lead to dangerous internal bleeding. Second, blood thinners don’t actually destroy clots that already exist. These go away with time, although a doctor can prescribe other drugs to deal with them if they pose a significant danger. (Learn More)

Sometimes blood thinners alone aren’t suitable for a patient. Clot-busting drugs called thrombolytics exist for serious cases of DVT or if a pulmonary embolism occurs, but they carry enough risks that doctors avoid using them unless necessary.

If blood thinners are not working as intended, there is a device called a vena cava filter that can be used. This device is installed in the vena cava and can filter for broken blood clots, preventing them from getting into the lungs. (Learn More) 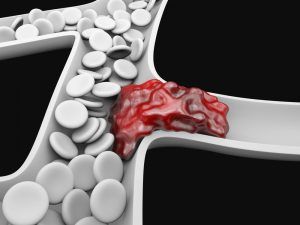 With deep vein thrombosis (DVT), there is a blood clot in the deep veins of the body, usually in the lower leg or thigh. This can be very dangerous, as a blood clot can break loose and cause a pulmonary embolism, which can be life-threatening.

If you have any reason to suspect you are suffering from DVT, see a doctor as soon as possible.

There are a few signs you may be suffering from DVT before more serious complications arise. These symptoms include:

Pulmonary embolisms occur when a blood vessel in the lungs is blocked by a blood clot. This can cause breathing problems, chest pains that worsen as you breathe deeply or cough, rapid pulse, and dizziness or fainting. You may cough up blood. If you notice the signs of a pulmonary embolism, call 911 immediately.

DVT can cause damage to your veins, as blood clots can reduce blood flow to the affected areas. This is called postphlebitic syndrome. While less life-threatening than a pulmonary embolism, see a doctor as soon as possible if you experience any of the following symptoms as they can become serious:

More commonly known as blood thinners, anticoagulants are the most common treatment for DVT. These drugs decrease your blood’s ability to clot, and they come in injectable and oral form.

An injectable anticoagulant is often given for a few days, and the patient is then switched over to an oral medication.

Blood thinners reduce the chances of developing a new clot and prevent current clots from getting bigger. You may have to take them for three months or even longer. Pulmonary embolisms are serious, and your doctor needs to ensure your risk of having one is as reduced as feasibly possible.

Blood thinners should be taken exactly as prescribed. Taking too much or too little can have dangerous consequences.

Certain blood medications are not good for pregnant women. If you are pregnant or might become pregnant, alert your doctor.

Some patients react poorly to blood thinners. The anti-clotting nature of the drug can put people at risk if they begin to bleed, although this risk is generally manageable. In severe cases, internal bleeding can arise and be life-threatening.

As mentioned, blood thinners do not actually destroy already formed clots. A patient must listen carefully to their doctor’s instructions to manage any risks associated with the clots they already have, which can take weeks to dissolve on their own.

It is important to understand the limits of anticoagulants. Blood thinners alone do not break up existing clots.

Depending on what your doctor deems appropriate, you may also have to take clot-busting drugs called thrombolytics to further reduce the risk of serious complications. These medications are used specifically for more serious DVT or pulmonary embolism. They can cause sudden bleeding, so doctors are generally very careful not to prescribe them except when necessary.

For some patients, blood thinners aren’t an option or they don’t work as well as needed. In these cases, a patient often has a vena cava filter installed.

A vena cava filter is inserted into a large vein called the vena cava, where it can filter for clots before they reach the lungs, helping to prevent a pulmonary embolism.