A new lover calls up, and although you’re ready to get it on, you’re a bit unkempt in some specific areas. What do you do?

Our recommendation: in true Lizzo form, if they don’t like your natural hair, kick them out the door. Even professionals agree, including this assistant professor of dermatology at Columbia University Medical Center: “It should be a decision one makes for themselves.”

So, what do people prefer to do with their pubic hair? We surveyed 1,027 people of various sexual orientations about their personal grooming. Our findings reveal people’s grooming habits and whether they feel pressured to go “Commando” and “Full Monty” – completely bare. We also answer the most teased question of all: Does one personal grooming style lead to more pleasure over another? Read on because action awaits.

To Bare or to Bush?

Seeing images of perfectly shaved supermodels with great skin can make us feel less positive toward ourselves. However, there are plenty of gorgeous people flaunting their hairy armpits, pubic region, legs – you name it – in the name of body positivity! Grooming habits, such as shaving, waxing, and laser hair removal, are very much a matter of personal choice. 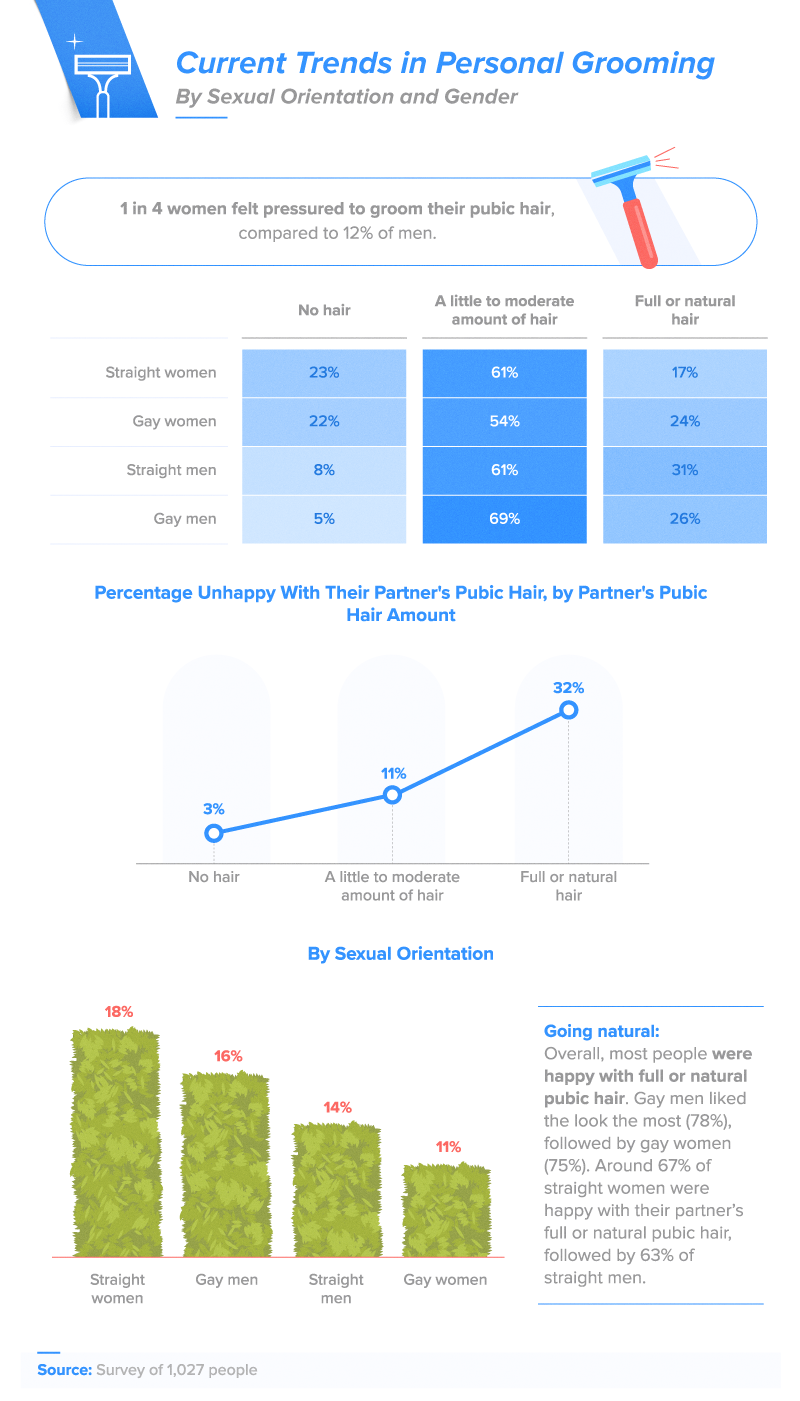 When we asked our survey participants about their own grooming, specifically pubic hair, their answers varied. But the majority had little-to-moderate amounts of hair. Sixty-nine percent of gay men sported a moderate look, and while 61% of straight men preferred the same, they were the most likely to have full or natural hair (31%). Gay women were the least likely to take a moderate approach (54%).

Maybe it’s from all those years of shaving commercials, but straight women were the most likely to have no pubic hair.

Those most likely to abandon sex due to ungroomed hair were straight women. Two-thirds of straight women said they were unwilling to go down on a partner with ungroomed pubic hair, and 27% would forgo having sex. This might be less about the amount of hair and more about a lack of grooming. Grooming, which includes cleansing, can keep everyone sexually pleased.

A bare pubic area may keep the lovers coming, but is your bank account satisfied? It depends on the grooming method. 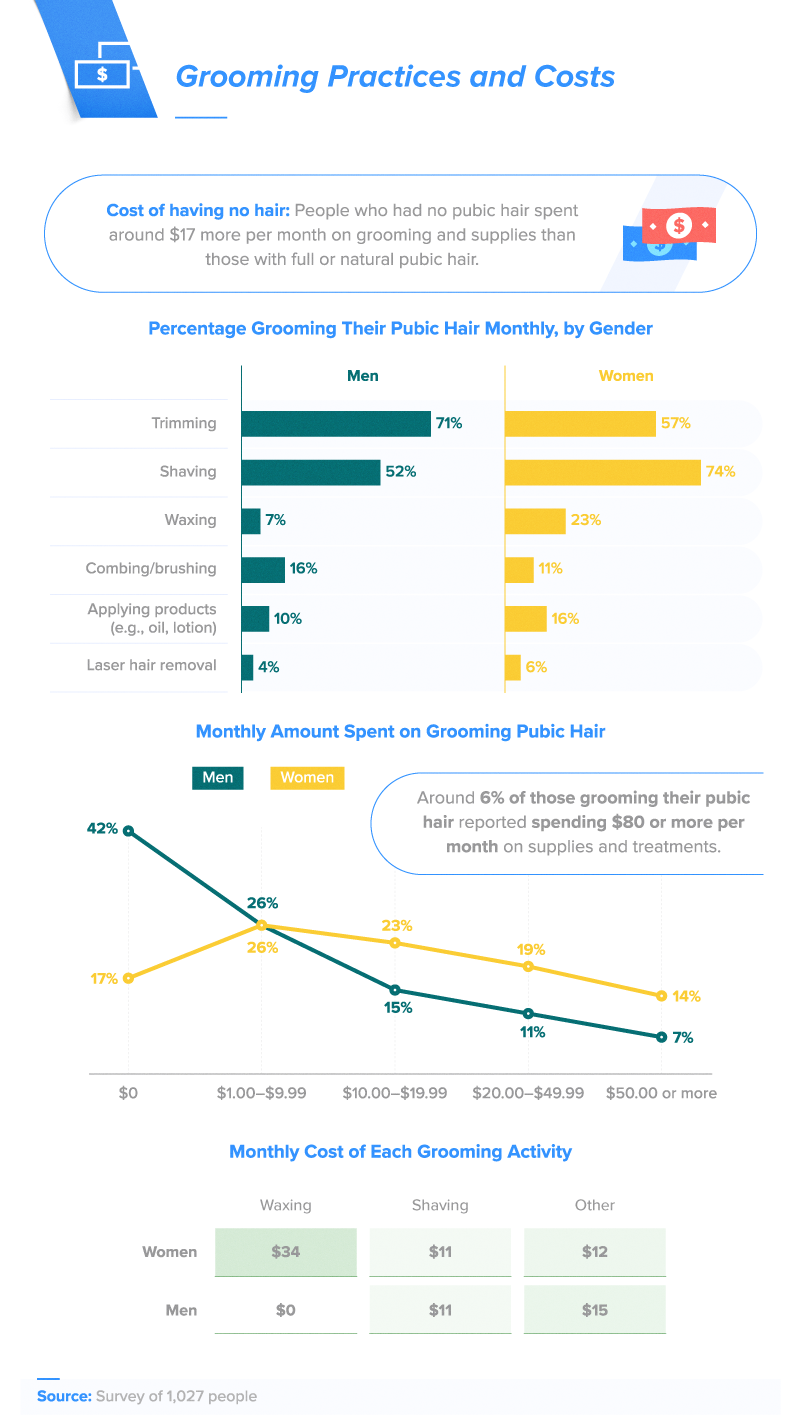 Seven in 10 men trimmed their pubic hair each month, which can be done with everything from an electric shaver to kitchen shears, although we don’t recommend the latter. However, the majority (74%) of women preferred to shave. Women were also more likely to wax, apply oils or lotions, and get laser hair removal – all costlier methods.

According to our findings, women spent $34 on waxing each month, on average, and about $11 on shaving. Six percent of people reported spending as much as $80 per month to get rid of unwanted hair. Men were most likely to spend $0 on grooming treatments or supplies.

Body hair is natural, but somewhere along the way, we were taught that a little or a lot of fuzz is bizarre! Does that reality eat away at our confidence? 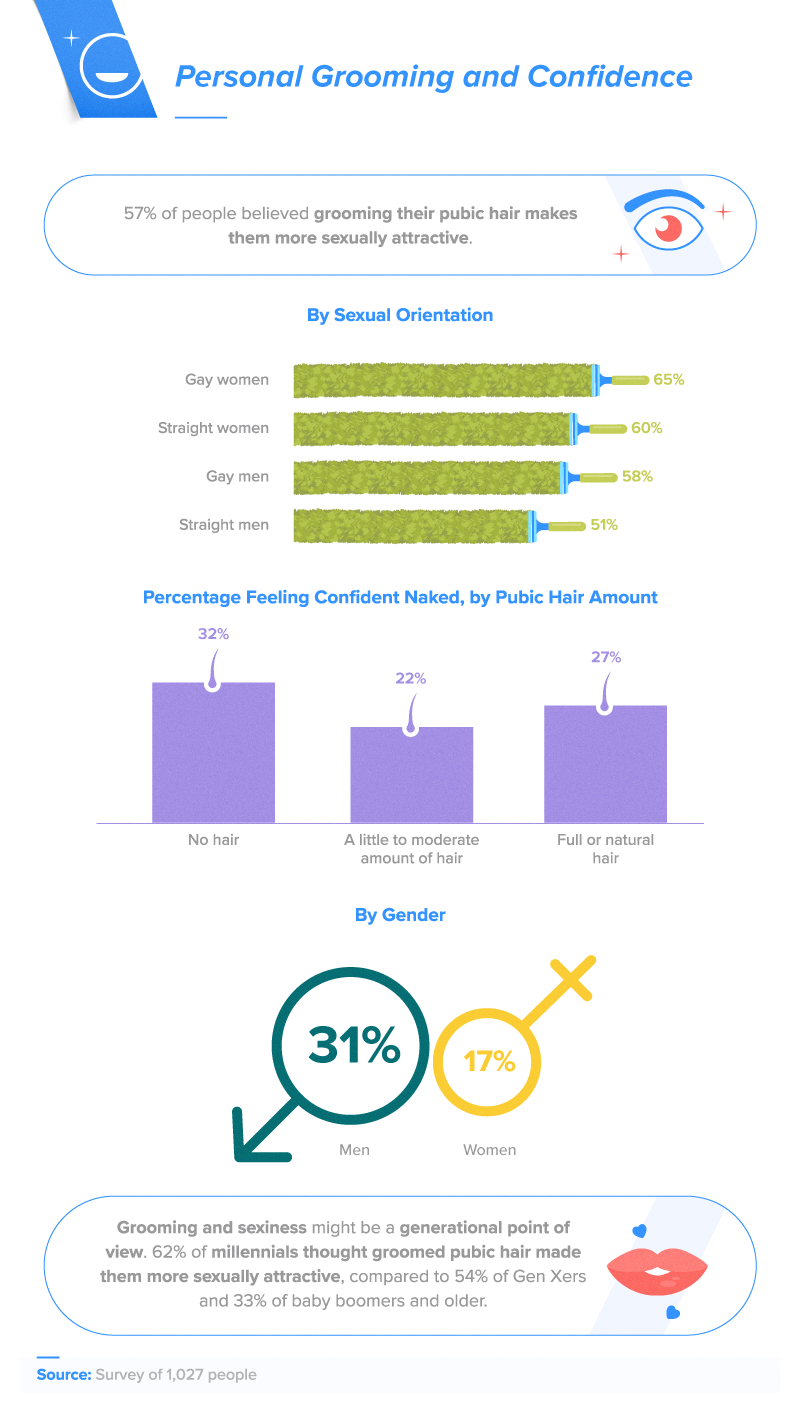 More than half of our survey participants said pubic hair grooming made them more sexually attractive. Women were more likely than men to hold this belief. And people were most likely to feel confident naked if they had no pubic hair.

For some, growing out their body hair makes them feel sexy, and for others, trimming adds a boost of confidence. It’s all a matter of preference. If you’re afraid that a lover won’t perform for you because you choose to go natural, communicate with your partner about your grooming preferences, and ask them about theirs. Listen respectfully, and make sure they value your desires. Our findings show that although most people prefer groomed pubic hair, some like it au naturale. And the natural look doesn’t have to go untended.

Are you shaved and ready to enjoy your sex life, but need more than advice on pubic grooming? Visit Save.Health. We’ve got a long list of articles to satisfy all your rousing questions. Our expert team will also work with you to provide easy-to-understand prescription drug information and the best pricing!

We surveyed 1,027 sexually active people about their pubic grooming habits. Around 38% of respondents were straight women, 39% were straight men, 11% were gay women, and 11% were gay men. Respondents’ ages ranged from 18 to 87 with an average age of 37 and a standard deviation of 11 years. We did not have a validated scale for sexual satisfaction, so we created one using 1 to 5, with 1 being “not at all sexually satisfied” and 5 being “very sexually satisfied.” Data were not weighted, and hypotheses were not tested. Survey data are subject to certain limitations due to self-reporting, such as exaggeration and telescoping. This was an exploratory look at how people regard personal grooming and its relationship to confidence and sexual attractiveness.

There’s a lot of information out there about personal grooming and sex. We’re happy your research has led you to our content, and we encourage sharing it for noncommercial reuse. We do ask that you link back here so that people can view our findings and review the methodology used.