Saw palmetto is a small tree that grows in southeastern parts of North America. (Learn More)

The berries of the saw palmetto tree have been reputed to address issues with male and female pattern baldness. (Learn More) However, the research support is scant. (Learn More)

The reported side effects of using saw palmetto have been relatively mild in research studies, but there are some other concerns for more serious potential side effects. (Learn More)

The herb can be taken in numerous manners. (Learn More) There is a range of doses that are expected to be therapeutic. (Learn More)

At the current time, saw palmetto does appear to have some promise in addressing hair loss, but it does not appear to be as effective as standard treatments. Consult with your physician before using this herbal supplement. (Learn More)

In the U.S., it is commonly referred to as the saw palmetto tree. It produces dark berries that have been used by Native Americans, and other people indigenous to the areas where it grows, as an aphrodisiac or for other medicinal reasons. 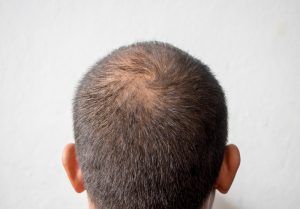 Although the actual mechanism of action that is purported to address hair loss through the use of saw palmetto berries is not known, it is thought to work by blocking an enzyme that converts testosterone into DHT (dihydrotestosterone). DHT is thought to be responsible for male and female pattern baldness.

Higher levels of androgens like DHT are believed to reduce the growth cycle of hair and result in shorter and thinner strands of hair growing on your head. Saw palmetto may block this androgen and therefore reduce the rate of male and female pattern baldness. However, research support is scant at best.

There is some minor research support for the use of saw palmetto for male or female pattern baldness.

In one 2012 study, which is still widely cited as support for saw palmetto, men who suffered from male pattern baldness took 320 mg of saw palmetto daily or the medication Rogaine (finasteride) over a two-year period. By the end of the study, about a third of those given saw palmetto reported increased hair growth, but even then, it was not as effective as the Rogaine treatment was.

Other earlier research  also cited by supporters of saw palmetto compared saw palmetto to a placebo. The research found that the use of saw palmetto products is more effective than a placebo, increasing hair growth in research participants with male or female pattern baldness.

However, in some of these research studies, the product containing saw palmetto contained other ingredients that are also believed to facilitate hair growth. As a result, the research methodology is questionable regarding its confirmation that saw palmetto alone can produce hair growth.

Are There Side Effects?

As with many other herbal supplements, very little is known about the long-term side effects associated with its use. In the research studies discussed above, side effects were typically mild. In some cases, they included:

There are some scattered reports that suggest people who use saw palmetto may be at risk for pancreatitis or liver injury, but at the time of this writing, it is not clear if the use of saw palmetto is responsible for this or if it is some other herbal product included in the treatment.

The other concern regarding the use of saw palmetto is that herbal supplements are not strongly regulated by the Food and Drug Administration (FDA), and the purity of the product you buy is not always guaranteed.

Saw palmetto should not be used with other medications that are designed to treat an enlarged prostate or hair loss. It is believed to work in a similar manner to these medications, and you could suffer ill effects by combining these products. 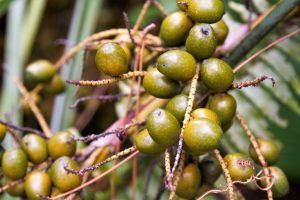 How Is Saw Palmetto Taken?

Saw palmetto can be used in several different manners.

Currently, there appears to be little research regarding the effective dose of saw palmetto in the treatment of hair loss.

When it is used as the dried supplement or as a liquid extract, the effective daily doses appears to be between 160 mg and 320 mg. When used as a tea or when the berries are eaten, it is unclear what the effective dose is.

The active ingredients in saw palmetto may not be water-soluble, so using it as a tea may be totally ineffective.

Always consult with your physician before using any herbal product, including saw palmetto.

In conclusion, research studies suggest that saw palmetto may facilitate hair growth in some individuals who have male or female pattern baldness. However, at the current time, other medications that are approved to treat hair loss appear to work much better.

Much of the popularity of saw palmetto as a potential cure for hair loss is based on the belief of how it could affect specific androgens and not on solid research findings.

Before using saw palmetto to address hair loss, discuss the issue with your physician

Serenoa Repens: Does It Have Any Role in the Management of Androgenetic Alopecia? (January 2009). Journal of Cutaneous and Aesthetic Surgery.

Cause of Androgenic Alopecia: Crux of the Matter. (November 2013). Plastic and Reconstructive Surgery Global Open.

A Randomized, Double-Blind, Placebo-Controlled Trial to Determine the effectiveness of Botanically Derived Inhibitors of 5-α-Reductase in the Treatment of Androgenetic Alopecia. (April 2002). The Journal of Alternative & Complementary Medicine.