Metformin is a treatment for type II diabetes. (Learn More) One of the rarer side effects of metformin use is hair loss. (Learn More)

Research studies, mostly case studies, have documented some instances where it is believed that metformin may have caused hair loss in people with diabetes. (Learn More)

It is not understood if metformin directly or indirectly induces hair loss in rare cases.  (Learn More) Hair loss occurring in people with diabetes may be due to the effects of diabetes (Learn More) or other issues. (Learn More)

There may be cases where metformin use is associated with hair growth. (Learn More)

Diabetes is a disease that involves your reaction to insulin or lack of insulin in the body. The two major different types of diabetes are:

Diabetes can also occur due to other causes, such as gestational diabetes that occurs in some women after childbirth.

Metformin: A Treatment for Diabetes

Metformin — known by the brand names Glucophage, Glumetza, and Riomet — is a first-line treatment for people who have type II diabetes. Along with lifestyle changes (diet and exercise), metformin can be used to control insulin levels and regulate blood sugar levels.

Metformin is also prescribed to treat women with polycystic ovary syndrome. Increased blood sugar levels are common in women with this syndrome, and treatment with metformin can help to normalize levels.

Side Effects of Metformin

The following are less common side effects:

In rare cases, metformin use may result in anemia, which can include difficulty concentrating, drowsiness, lethargy, overall feelings of weakness, sleep difficulties, and hair loss.

Metformin use may also result in lactic acidosis, a buildup of lactic acid in the body that can be potentially serious. It can lead to coma or death. 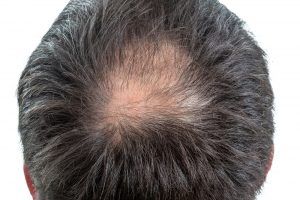 There are a few studies, mostly case studies, where a person who used metformin suffered hair loss.

For instance, a 2017 report in the journal Current Drug Safety described a 69-year-old male with type II diabetes who lost facial hair (eyelashes and eyebrows) while being treated with metformin and another medication (sitagliptin) for type II diabetes. A medical examination ruled out any disease processes that might have contributed to the man’s hair loss. It was concluded that metformin may have produced hair loss in this person.

There is research to suggest that long-term use of metformin may be associated with a deficiency of vitamin B12 and the development of anemia. Metformin use may interfere with the gastrointestinal system’s ability to absorb vitamin B12, leading to this deficiency.

People with anemia may experience hair loss. As a result, metformin may contribute to hair loss in this manner.

Is Hair Loss Caused by Diabetes?

People diagnosed with type II diabetes will often develop insulin resistance, which occurs when the body does not appropriately respond to insulin. There is research that reports a link between insulin resistance and hair loss (alopecia).

Type I diabetes can increase the risk of developing alopecia areata, a condition where the immune system attacks the hair follicles and there is significant hair loss. If you have type II diabetes, you may have a similar response.

Any form of diabetes could increase the risk of blood circulation problems, resulting in hair follicles not receiving enough oxygen and nutrition. This could lead to hair falling out. 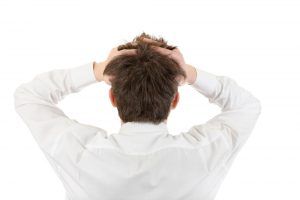 The American Diabetes Association reports that stress can increase blood glucose levels, making the symptoms of diabetes worse. Living with diabetes can also increase stress due to the problems associated with the medical condition.

One of the potential causes of hair loss is chronic stress. Added stress associated with a diabetes diagnosis may increase the risk for hair loss in some people.

There is some evidence that the use of metformin may not be associated with hair loss.

If you are taking metformin and experiencing hair loss, your physician can order a blood test to check your levels of vitamin B12 and iron. If needed, you can take supplements and get treatment for these specific conditions. This should help reduce your hair loss.

Hair loss can involve a combination of contributing factors. If it is believed that your hair loss is due to stress or some other issue associated with diabetes, these conditions can also be addressed. In many cases, your hair loss could be reversed.

However, many people diagnosed with type II diabetes are older. They may simply be suffering from male or female pattern baldness, which is most likely hereditary.

It is certainly conceivable that genetic factors can interact with your diabetes and use of metformin to accelerate your hair loss. More far-reaching treatments like hair transplants or medications like Rogaine might be necessary to address hair loss in these cases.

Diabetes. (May 2018). Centers for Disease Control and Prevention.

Loss of Eyebrows and Eyelashes During Concomitant Treatment With Sitagliptin and Metformin. (January 2017). Current Drug Safety.

Long-term Metformin Use and Vitamin B12 Deficiency in the Diabetes Prevention Program Outcomes Study. (February 2016). The Journal of the Clinical Endocrinology and Metabolism.